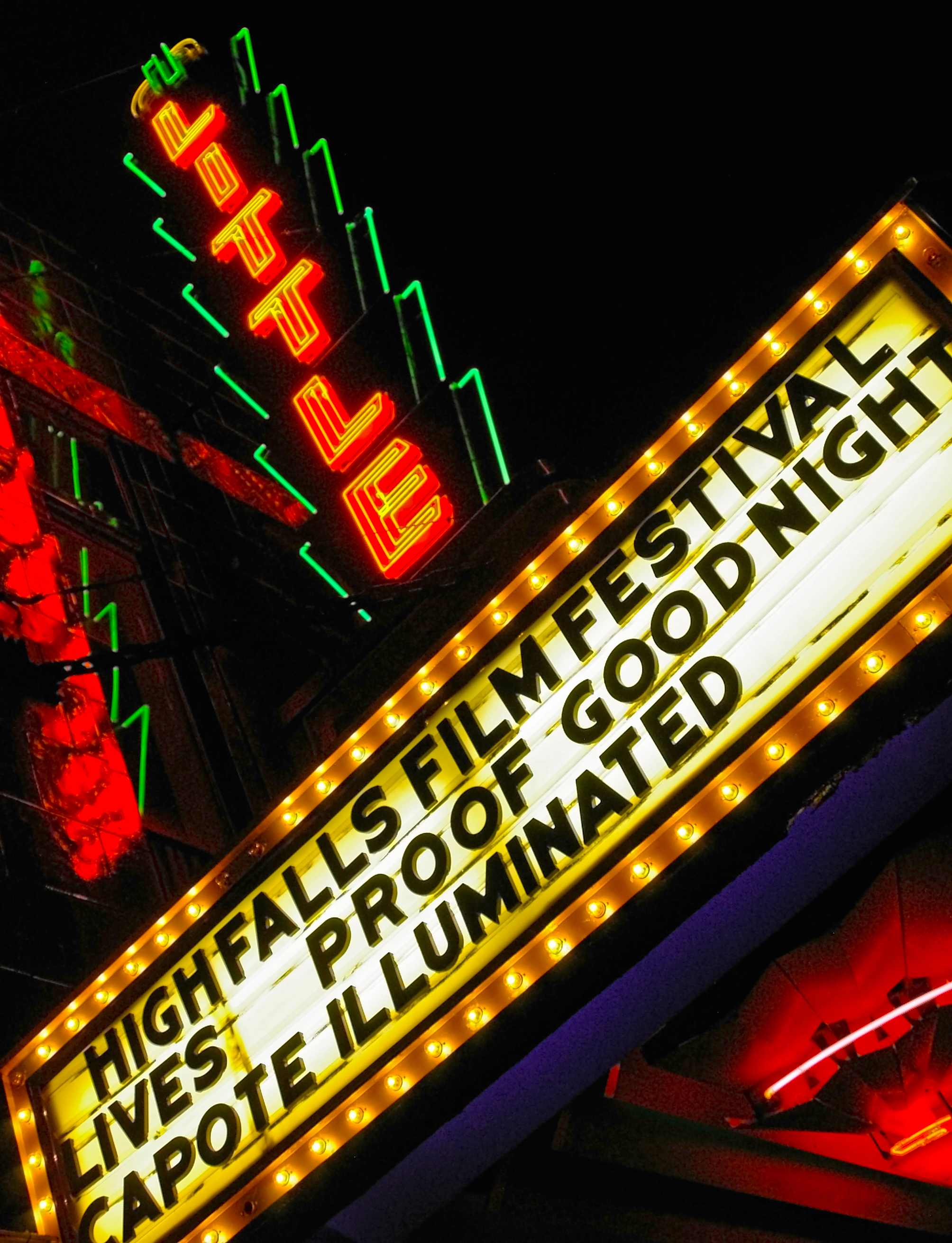 The Little Theatre began construction in Rochester in 1928 as a link in a proposed chain of small theatres designed to provide an “intimate” alternative to the large commercial movie houses of the day. The Little Cinema Movement, which was dedicated to showing “art films that appeal to the intelligent and sophisticated,” started in 1925. When it opened in 1929, The Little Theatre was the fifth “little temple of the cinema” to be built, and was constructed in the Art Deco style by Edgar Phillips of Rochester and Frederick Pike of Buffalo. The distinctive style of the original theatre, now Little Theatre 1, has earned it a place on the National Register of Historic Places. The Little Theatre officially opened October 17, 1929. A three-man orchestra seated in the upper rear left balcony provided accompaniment for the 299 persons attending. The Little Theatre was quickly nicknamed “The House of Silent Shadows” and its first presentation was the silent film “Cyrano de Bergerac.”

Early literature describing The Little alludes to the physical layout, atmosphere, and programs as exuding elegance, refinement, intelligence, and repose as an antidote to the helter-skelter pace of the Roaring Twenties. By early 1931, Albert A. Fenvyssey, considered Rochester’s leading theatrical expert, was approached to assist in establishing the theatre’s role in the local community. Fenvyssey persuaded the owners, Mr. and Mrs. Francis Kirk Remington, to turn the theatre over to his daughter, Florence Fenvyssey Belinson, and son-in-law Ben Belinson. A tireless champion of The Little and cultural improvement, Florence Belinson promoted the theatre throughout the Rochester community, especially among women’s groups. In her many addresses, she affirmed The Little’s commitment to high social and cultural standards.

Within two years of opening, The Little would reinvent itself, incorporating “talking films” into its repertoire. The Little’s first talking picture was “Outward Bound” featuring Douglas Fairbanks, Jr., Helen Chandler and Leslie Howard. The film was previewed on April 15, 1931. Shortly thereafter, The Little took the bold step of showing a foreign language film. While common in larger cities, such films were rarely if ever shown in smaller communities like Rochester. The first to be shown at The Little was the German language film “Two Hearts in Waltz Time.”

So successful would The Little become that its reputation for quality attracted national recognition. One of The Little’s greatest coups occurred in 1949 when the theatre was chosen to premiere Olivier’s “Hamlet.” In words that recall the Theatre’s original mission, The Little drew praise from those who had selected the theatre as the premiere site. The Little earned selection because of its “Consistent policy of showing unusual motion pictures and its record for maintaining long runs of such films.”

In May 1982, William Coppard and John and Pam Blanpied bought The Little and undertook an ambitious restoration project. The new owners reaffirmed the theatre’s original commitment to film and sought to recreate an atmosphere keeping with the original design. Two additional screens were created in a tire store adjacent to the original East Avenue location.

In 1993, after consulting with the founders of the largest chain of art theatres in the United States, it was decided to expand again. Two more screens were finished in 1994 in a former collision shop next to Theaters 2 and 3. A café was added in another building next to the new Theaters 4 and 5. Two years later, in 1996, Theaters 2 and 3 were given fresh seats and other upgrades. The resulting was a total of five theaters seating 940, all with stereo sound and comfortable seating, as well as a 70-seat café featuring live jazz music, accented by a rotating gallery of local artists.

The intimate atmosphere of its historic East Avenue location has now been a mainstay in Rochester’s East End for over 85 years. While other theaters in the United States have continually closed and (sometimes) reopened, The Little screens have never gone dark. This makes it the oldest continuously running art-house film theatre in the country.

The theater is dedicated to preserving its 35mm heritage, including installation of “reel to reel” technology that permits exhibition of archival material, with 35mm film prints playable on 2 different screens.