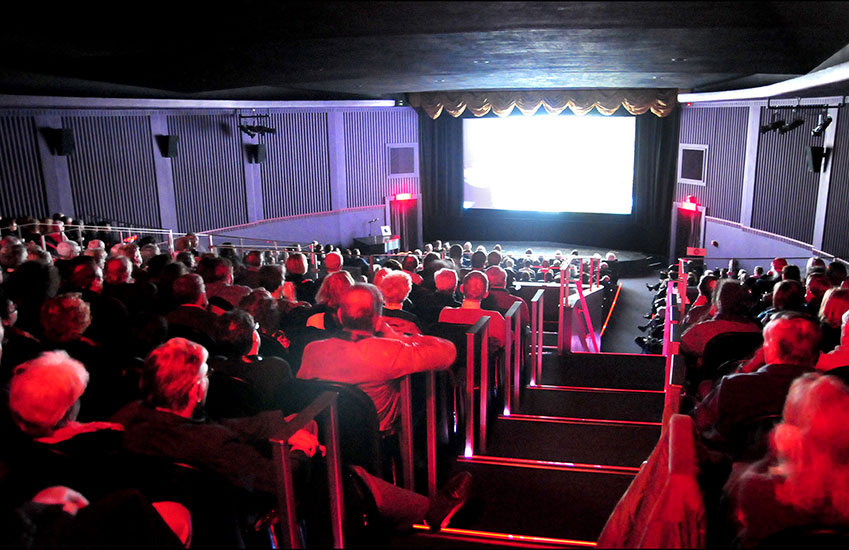 Providing a proper venue to screen the museum’s film collection was of paramount importance to Oscar N. Solbert, the museum’s first director. He secured funding for the construction of the theater from George Dryden, widower of George Eastman’s niece, Ellen. Ground was broken in April 1950. The Dryden Theatre first welcomed the public on March 2, 1951, with special guest Lowell Thomas broadcasting coast-to-coast in a program that saluted George Eastman and the city of Rochester. The first feature film screening—Jean Renoir’s Nana (1926)—was held on March 14, marking the official opening. Since its curtain was raised in 1951, the Dryden Theatre has supported the growth of the museum’s moving image collection, provided a forum for discussion on the history of the medium, and screened more than 16,000 titles. The Dryden has hosted hundreds of cinema’s most talented directors, cinematographers, actors, animators, critics, and others, serving as a meeting place for those who practice the art of making film and their audiences.

The 500-seat Dryden Theatre is the premier exhibition space for the art of cinema as championed and interpreted by the George Eastman Museum. Presenting film screenings every day of the week, the Dryden is devoted to showing all films in their original formats, thus honoring and reproducing their historical—and aesthetically supreme—modes of exhibition. It is one of the very few theaters in the world equipped for the projection of original nitrate film that also makes nitrate film screenings part of its regular program.

The projection booth is equipped with two reel-to-reel 35mm/16mm Kinoton projectors and two 35mm Century projectors. Both sets of projectors have adaptable lenses for various aspect ratios. The Dryden is also equipped with a Barco Digital Cinema projector capable of projecting DCPs and a wide variety of other digital formats.

The Dryden Theatre projection booth is customized to handle nitrate film. Discontinued in the mid-20th century due to its highly flammable nature, nitrate film stock—the combination of a silver nitrate base and orthochromatic or panchromatic emulsion—provided a shimmering, luminous motion picture experience for moviegoers during the decades of cinema. One of only a handful of venues in the world that is still safely equipped and certified to show 35mm nitrate prints, the Dryden Theatre is occasionally able to re-introduce audiences to this special kind of cinema magic with classic films from our vaults or other leading archives. Because no nitrate film stock is being produced today, these rare screenings of vintage prints may represent your only opportunity to experience this distinctive aesthetic visual pleasure. In 2015, the Eastman Museum held its inaugural festival celebrating the preservation and presentation of these rare prints: The Nitrate Picture Show, the world’s first festival of film conservation.