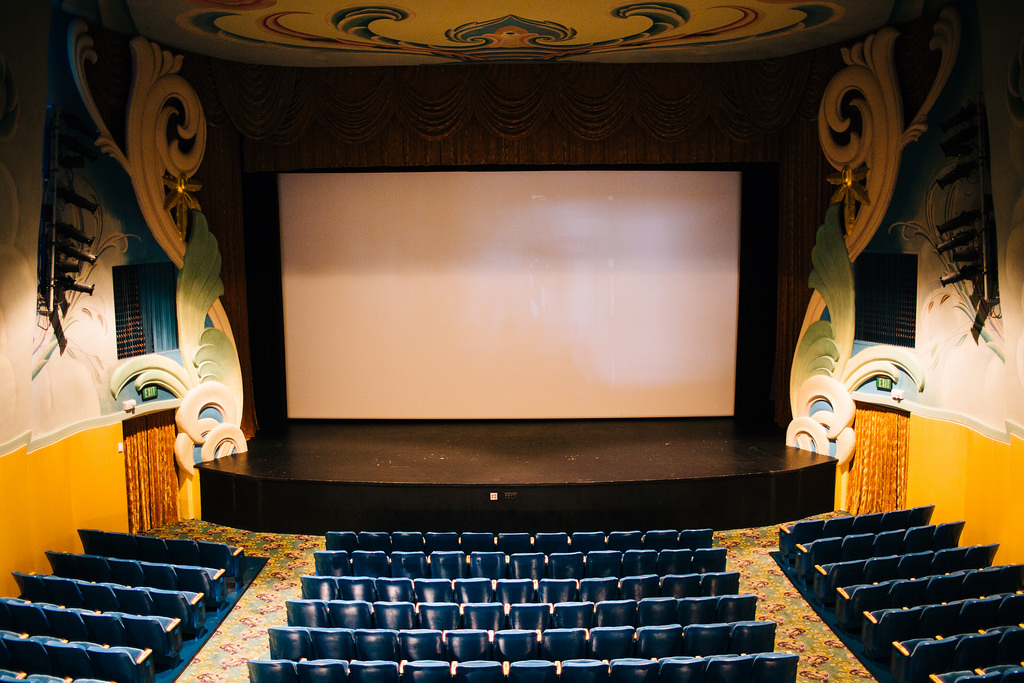 On March 5, 1945, the Egyptian Theater (the site of Midwest Theater) was destroyed by a fire. The fire gave the owner, William H. Ostenberg, Jr., the opportunity to build a grand theater for Scottsbluff. The fire-gutted theater was replaced in just over a year with the Midwest Theater. Charles D. Strong, a prominent Denver, Colorado architect, was hired to draw the design plans for the new theater.

The theater is designed in the Modernistic style of architecture and exhibits an exceptionally high degree of architectural and artistic integrity, both on its interior and exterior. The theater’s most striking feature, as described in a 1946 newspaper article, “is the marquee with a stainless steel and aluminum tower extending 60’ above the entrance”. The 15’ wide tower is flanked by glazed masonry panels. The vertical center of the tower contains 132 aluminum stars and was backed by 68 spotlights operated by an electric flasher system. Extending from the top of the tower’s two aluminum poles are two stylized wings outlined with neon lights and two starburst spheres with flashing mercury bulbs. The lighted tower was designed to be seen at night for a radius of twenty miles. What a magnificent sight. Friends of the Midwest Theater did a complete renovation of the marquee and all of the inside neon in Nov 2002.

The three dimensional plaster floral scrolls still ascend 25 feet from the floor on either side of the screen. The theme of the scrolls floral pattern continues to the colorful painted murals on the walls and ceiling. Very futuristic-sounding materials were used in the decorating of this building—Leverex, Plexiglass, Flexwood, Herculite, Satin aluminum just to name a few. There is neon throughout the interior of the theater. The “modern” interior décor and the dominant marquee and tower added to the architectural excitement of the streetscape of Scottsbluff’s downtown business district.

The theater remains today, in near original condition, with only cosmetic changes to the interior lobby and foyer during the 1970s. In November 1998 Friends of the Midwest Theater opened the theater showing classic and second-run movies on Thanksgiving weekend with three holiday classics for three weeks: “Home Alone” followed by “Prancer” and “Miracle on 34th Street.”

The Historic Midwest Theater was placed on the National Registry of Historic Places in 1997.