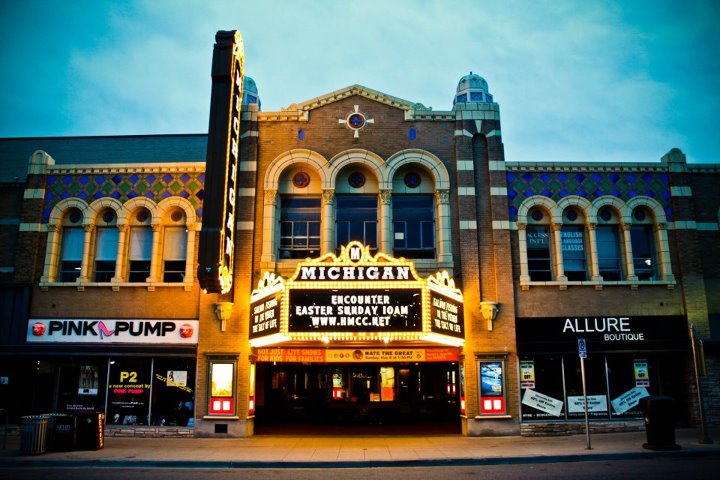 Opened in 1928, the Michigan Theater was hailed as “a Shrine to the Arts… not built for today only, but constructed in the hopes that it might be a monument for years to come and a credit to the community…” Detroit architect Maurice Finkel designed an outstanding silent film exhibition theater appropriate for a town with a world-class university at its core. The Michigan Theater contained a fully functioning stage, a sizable orchestra pit, an elaborate Barton theater organ, grand lobbies and over 1,700 seats, all designed around its core capability of being a theater intended for film exhibition. In its early days, the theater was operated as a commercial vaudeville and movie house with occasional national touring theater and other performing arts attractions.

Over the years, most significantly in 1956, Butterfield made renovations to the theater’s interior and façade to update it to the tastes of “modern” audiences. This resulted in the grand movie palace design being covered up and painted over. Green marble paneling and a drop ceiling were added to cover the ornate plaster work in the lobby. The Grand Foyer and the historic auditorium were painted in an ivory, grey, slate blue, and orange color scheme, obliterating the intricate gilt work of the decorative plaster. The Butterfield Theatre Corporation vacated the building at the conclusion of their 50 year lease in 1979.

In 2006, the League of Historic American Theatres named the MTF its “Outstanding Historic Theater” and the Sundance Institute chose the MTF as one of 12 founding members of its Art House Project. In addition to its stewardship of the facility, the MTF’s programs include being a community gathering place, an exceptional film exhibition space and a venue for a variety of live-on-stage attractions.

The MTF presents the most extensive and diverse film program in Michigan. Presented in the Historic Auditorium, Screening Room and at the nearby State Theater (via a programming contract), films include classic, contemporary foreign, documentary, student, American independent and silent-era films. The MTF is one of the few exhibitors in the country that can present films in a wide range of celluloid and digital cinema formats including 16mm, 35mm, 70mm, celluloid 3D and high quality, high definition digital formats, all with state-of-the-art sound systems.