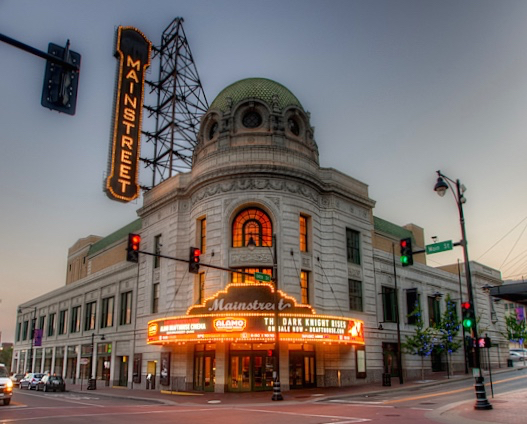 The 3,000-plus seat Mainstreet Theatre opened in October 30, 1921, the only theater in Kansas City designed by the Chicago firm of Rapp & Rapp. Its interior design was French Baroque style and the exterior a blend of Neo-Classical and French Empire styles. The lobby area is topped by a dome encircled by circular windows.

It was the first theater in Kansas City to contain a nursery for parents attending shows. The Mainstreet Theatre also featured an underground tunnel which connected it to the nearby President Hotel. Also, its basement and sub-basement contained space for animals used in the elaborate vaudeville shows put on at the theater, including cages for animals as large as elephants (and elevators big enough to carry them up to the stage) and pools for seals.

From the time the Mainstreet Theatre opened until 1938, it was part of the so-called “Junior Orpheum” circuit, and among the famous names to play its stage were Charlie Chaplin and Cab Calloway.

In September 2008, work began to convert the theatre into a six-screen movie theatre. It reopened in April 2009, and reverted back to its original name Mainstreet Theatre. The two largest theatres have 300 seats each, and the smaller theaters have 50 to 100 seats. On Novermber 15, 2012, it became the Alamo Drafthouse Mainstreet.