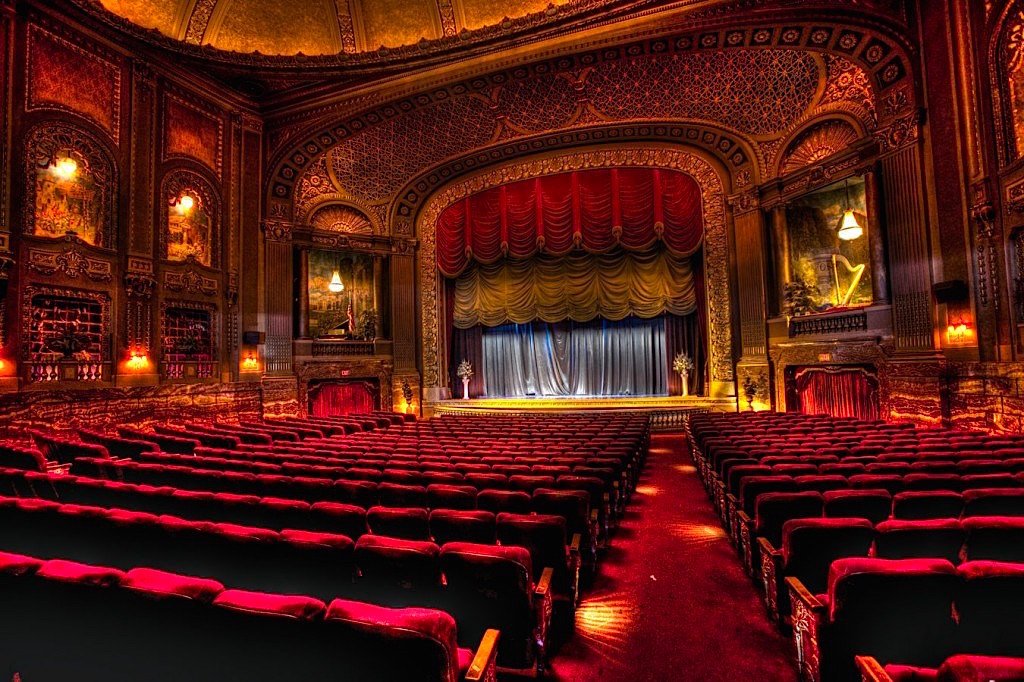 The Byrd Theatre was built in 1928 in Richmond, Virginia as one of the Nation’s Grand Movie Palaces and today is both a State and National Historic landmark. The 1300-seat theater, named after William Byrd, one of the founders of Richmond, is one of the nation’s finest cinema treasures.

Unlike many opulent theaters that were built during the 1920s and 1930s in the United States, the Byrd Theatre has survived largely unaltered in appearance or function, operating almost continuously since 1928 as a movie theater. The first movie shown at the Byrd on Christmas Eve, 1928, was Waterfront, a silent movie with sound added. This was a comedy with Dorothy MacKaill and Jack Mulhall. Patrons paid 25 cents for a matinee and 50 cents for an evening movie. Today patrons pay $1.99 for a movie.

The Byrd Theatre is an architectural treasure chest adorned with paintings, marbled walls, gold leaf arches, a richly appointed mezzanine, and some of the original patterned mohair-covered seats. An 18-foot, two-and-a-half ton Czechoslovakian crystal chandelier suspended over the auditorium contains over 5,000 crystals illuminated by 500 red, blue, green and amber lights.

Built by Walter Coulter and Charles Somma, the theatre was designed in the French Empire style by Fred Bishop, a Richmond architect. The decor was by the Brunet Studios of New York.

In 1953 the original 35mm Simplex standards were replaced by the current Simplex 35mm projectors, which are still used daily. Ray Dolby, who created the Dolby sound system, toured the Byrd in 2004 and was so impressed with the theater that he donated a Dolby Digital sound system, which was installed in 2006. Just as in 1928, the Byrd has state-of-the-art sound technology.

The design of Grand Movie Palaces in the 1920s and l930s was reminiscent of the opulent European Opera Houses and the Byrd was no different. No expenses were spared in its design and construction with a cost of about $900,000. In today’s dollars that amounts to almost $11 million. And some architectural details simply cannot be duplicated. Sometimes in the dimly lit theatre, the delicate architectural details are easy to miss.

The murals in the lobby and alcoves were hand-painted in a New York studio. The cameos and other paintings are a mixture of acrylic and oil. Most of the largest paintings have a Greek mythology theme. The auditorium recalls a French opera house in the elegant and flamboyant Rococo style expressed in an abundance of marble, crystal, gold leaf, crimson velvet, and elaborate plaster decorations. The basic colors are amber and gold with a red velvet accent. The color scheme and detail are continued in the mezzanine and the balcony.

Along the top of the auditorium’s sidewalls in the niches are six hand-painted murals. The large murals on each side of the stage form a background to the opera-style boxes, which display a piano and harp. Everything in the Byrd Theatre is big although it may not appear that way. The two chandeliers in the alcoves are about seven feet tall while the main chandelier is 18 feet tall. The main chandelier was assembled on site. It would never fit through a door. All of the chandeliers have four light circuits, red, blue, amber and green. (The green only functions in the main chandelier) All of the other lighting in the theatre is red, blue and amber. The main lobby chandelier is over eight feet high with clear white bulbs.

The Byrd Theatre has never been remodeled with a few exceptions involving the stage area to accommodate up-to-date screens and the lobby to make room for a concession area.