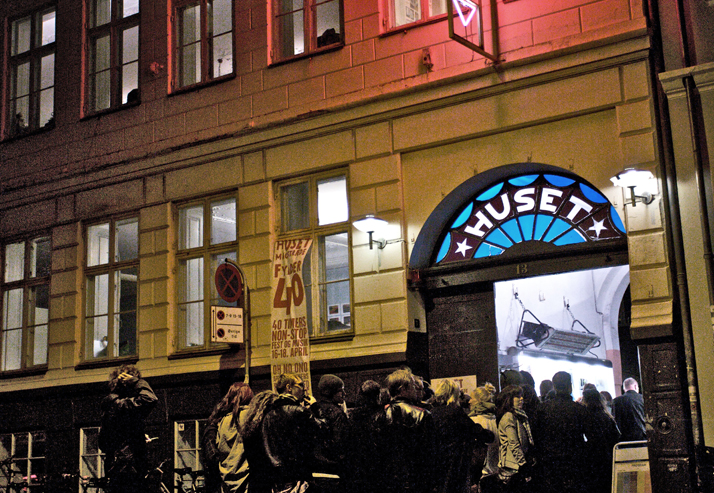 Husets Biograf is part of the three-building Huset KBH complex in the heart of Copenhagen that provides space for spoken word, standup, theatre, live music and film within its labyrinthine sprawl of rooms.

The cinema in Huset has been in continuous operation since 1973. With 63 seats and an atmospheric cafe, it is Denmark’s cosiest venue as well as one of the most charming and eccentrically decorated.

Husets Biograf stopped showing commercial arthouse features in 2011, when the industry started to phase out 35mm film printing and distribution. The venue had no way to meet the expensive upgrade to hard-drive projection. So it morphed from a marginal one-screen, second-run arthouse into a throwback repertory that might be described as a pocket-size mix of the Prince Charles and the old Scala Cinema, but with a more updated and community-based edge. It tends to favour cult, underground, grindhouse and midnight-movie style fare and every August stages a week-long extravaganza of open-air, drive-in style cinema, with movies unspooling on 16mm.

The venue is home to the Copenhagen short film festival and the Faces in the Dark Horror and Grindhouse festival, Denmark’s sex workers film festival, and also hosts the city’s longest running children’s film club. Its wild diversity of programming can be attributed to the open-minded Danish mentality, the absence of censorship and its own stubborn insistence not to be bound to any profile or brand. It is Denmark’s most accessible and grassroots screening space, and occasionally hosts live music.

Husets Biograf is the last cinema in Denmark that still screens Super 8, 16mm and 35mm film and teaches 35mm operation to anyone who wishes to join the support group. It is run by an all-volunteer staff of 30.