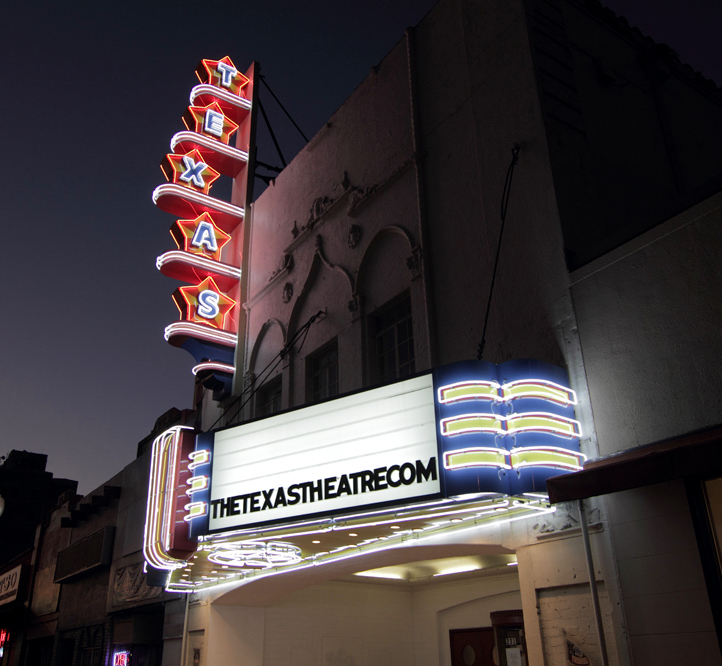 The Texas Theatre was opened at 231 West Jefferson Boulevard with fanfare on San Jacinto Day, April 21, 1931. The Texas Theatre was the novelty of longtime Oak Cliff resident and entrepreneur, C. R. McHenry, better known in the community as “Uncle Mack.” McHenry’s dream was to build a theater with state-of-the-art projection and sound equipment.

McHenry partnered with four Dallas-area businessmen to help him realize this dream. Together they hired renowned architect W. Scott Dunne to design the Texas. He opted for a “Venetian” style, quite similar to his earlier Texas Theater in San Angelo. The design included opera boxes in the auditorium under a full night sky, fountains, projected clouds on the ceiling, and of course a giant chandelier. The completed theatre was the largest “suburban” movie house and the third-largest theatre in Dallas.

On November 22, 1963 at approximately 1:45 p.m., nearly 15 Dallas police officers converged on the Texas Theatre in search of a man who had entered without paying. That man was Lee Harvey Oswald—murder suspect in the slaying of Officer J.D. Tippit and later President John F. Kennedy’s accused lone assassin. He ducked into the theatre during an in-progress showing of War Is Hell and sat near the back of the auditorium.

As technology in moving, talking, and color pictures progressed and drive-ins and multiplex cinema became the rave, the Texas Theatre’s patrons slowly moved on to other entertainment venues. In 2001 The Oak Cliff Foundation purchased the building and began looking for a new permanent tenant. Several areas of the building were renovated and upgraded by the OCF. The Texas Theatre was added to the National Register of Historic Places in 2003.

On August 31st, 2010, Aviation Cinemas Inc, a company formed by filmmaker and film industry consultant Barak Epstein took over the lease of the Texas Theatre. Epstein enlisted the help of filmmakers Adam Donaghey, Eric Steele and Jason Reimer to begin new cinema and event venue operations at the Texas Theatre.

The Texas has both 16mm and 35mm capabilities, in addition to current video projection.