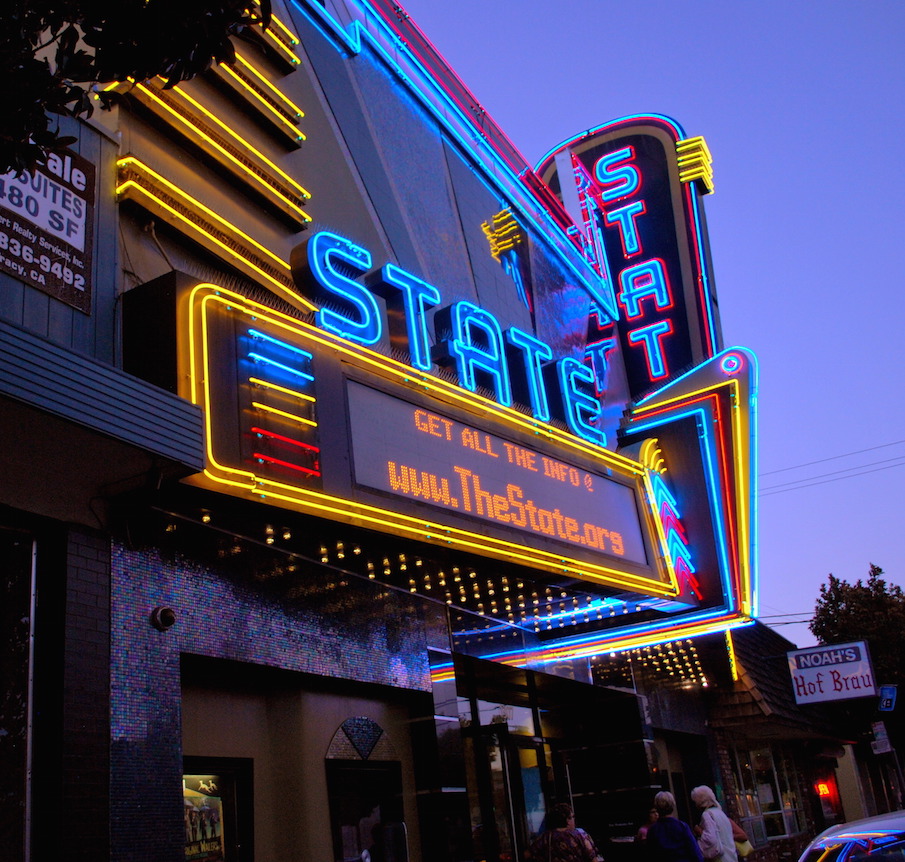 The mission of the nonprofit State Theatre is to preserve and operate Modesto’s only remaining historic theater, and to engage the community through a broad, diverse and inclusive array of films, performing arts and social, civic and educational events.
Theatre History

In its 80 years, Modesto’s State Theatre has borne witness to a vibrant city of more than 200,000 springing up around it, and the demise and demolition of eight of its fellow movie palaces – The Star, Isis, Dreamland, Auditorium, Richards (which later became the National, Princess and finally The Covell), The Strand, The Lyric (later named The Esquire), The La Loma, and The Modesto, all constructed from the turn of the century to the late ‘20s. Rather than succumbing to the wrecker’s ball, The State experienced a metamorphosis from a movie theater to a performing arts venue and community center. Over the years there have been remodels, changing owners, various governing boards, a stint as Cine Mexico, and perhaps most notable and remarkable- its complete renovation six years ago under new ownership, a nonprofit corporation. The renovation was managed by the Modesto Symphony who asked local designer, Michelle Lacy, ASID, CID, to submit her “vision” of a renovated State Theatre. Ms. Lacy had her hand in nearly every aspect of the design and renovation, from the silver-leafed, grand dome ceiling in the lobby and faux-painted walls – courtesy of Rhonda McDonald and Sue Oler, ofRhonda and Sue Wall Design – to the dramatic chandelier that presides over the foyer and ushers movie and concert goers into the lobby. Of course there were many more inspirations that followed in what became a year and half long project that Ms. Lacy regards as possibly the pinnacle of her professional career.There were many behind-the-scenes changes as well, including the installation of a state-of-the-art surround sound system by Meyer Sound, whose products are used in Carnegie Hall and the Royal Albert Hall. A $20,000 movie screen was also installed since film is still the focal point of the theater’s vibrant, year-round programming. The project, expertly guided by Guy Simile of Simile Construction, became for all involved a glorious tribute to the community, one Modesto residents will be proud of for decades to come.

With its new facade, sound system, marquee and lobby, The State Theatre now rivals its more modern counterparts in luxury and modern conveniences. But step into the house -the 570-seat auditorium- and you quickly realize, there’s no other place in Modesto like it. The Art Deco-era splendor, as designed by noted architect S. Charles Lee (1899-1990), still remains. The towering sconces, the larger-than-life, gold-leafed embellishments throughout, the hand-painted murals, are all decorative elements dating from 1934 when the theater was presented on Christmas Day to an appreciative, rural community drawn to the glamour, excitement and escape only Hollywood movies could provide. Flirtation Walk, starring Ruby Keeler and Dick Powell, drew crowds to what was described as a 21-gun salute to youth and gallantry, the big screen’s first military musical, and to the newest theater in town, a marvel of Art Deco design constructed at a cost of $100,000 by local builder Harry Brown.

The State’s designer, a Chicago-born architect and early proponent of Art Deco and Moderne style theaters, went on to become recognized as one of the most prolific and distinguished motion picture theater designers on the West Coast. After moving to Los Angeles in1922, his first major movie palace was the Tower Theatre, a Spanish-Romanesque-Moorish design that launched a career that would make Lee the principal designer of motion picture theaters in Los Angeles during the 1930s and 1940s. He is credited with designing over 400 theaters throughout California and Mexico, including The State and Fresno’s Tower Theatre (1939). His palatial and Baroque Los Angeles Theatre is regarded by many architectural historians as the finest theater building in L.A. Lee’s unofficial motto was “The Show Starts on The Sidewalk,” a theme that was carried throughout The State with its Deco-inspired adornments and murals that were very much “of the period.” Admission was 25 cents and air conditioning – a welcome novelty in a farming town situated in the sun-drenched Central Valley – was a major selling point for the city’s newest movie and certainly most modern movie palace. The State’s governing body continually searches for ways to keep the theater relevant, its programming fresh and its films a reflection of the industry’s most thoughtful – and thought-provoking – work. Most recently, The State made the leap to the high-definition, digital presentation of films. The 35mm projectors remain for classic films and use by the Modesto Film Society, but a hard drive and a server have replaced the multiple reels that arrive in oversize canisters and projectionists are no longer threading miles of film but work on a computer instead. There are always changes afoot at The State, but 79 years after its opening, a few things remain the same: hospitality is key and audiences still thrill to the splendor of an Art Deco theater with one foot firmly planted in Modesto’s history, and the other pointed squarely toward her future.