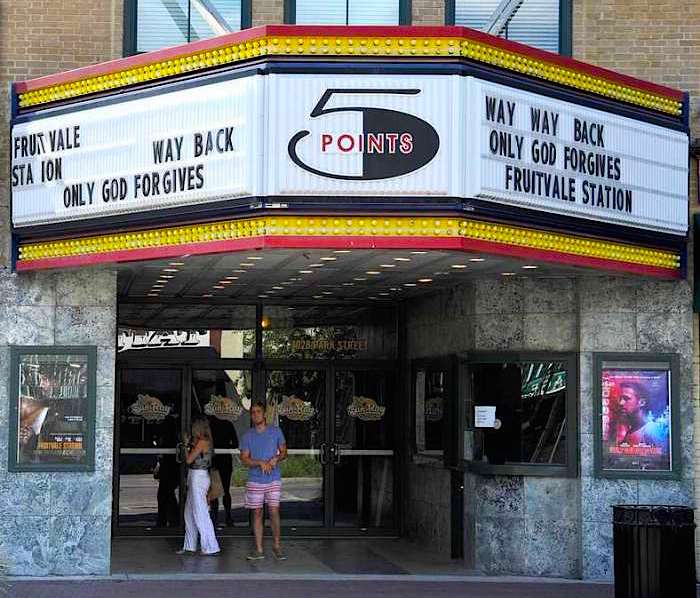 The Sun-Ray Cinema at 5 Points, formerly known as Riverside Theater and 5 Points Theatre, is a historic single-screen movie theater in Jacksonville, Florida. The first theater in Florida equipped to show talking pictures, it opened in March 1927 in the Five Points district of the Riverside and Avondale neighborhood.

The building was remodeled in 1949 and renamed the Five Points Theater when the marquee was added, which remains to this day. In 1977 the theater closed for several years and an attempt was made to “modernize” the building in 1978 with the application of stucco. In the early 1980s the movie theater shut down, and the acting group River City Playhouse moved into the space in 1984. In 1991 the building was remodeled into a nightclub, Club 5, which closed in 2004.

A four year, $4.5 million historic restoration was begun in 2004 after local car dealer Mike Shad purchased the property. Midway through the renovations, the facility was opened for private events like reunions and wedding receptions, but work was not completed until 2008. The renamed 5 Points Theatre and Historic Event Facility now offers 14 loft condominiums on the third and fourth floors, commercial/office space on the second level and retail space on the ground floor, in addition to the theater. Although the marquee was not original, it was also restored because it is considered a historic component. In 2010 the Theatre shifted to an “art house” format, with foreign, independent and classic films, late night movies, and special events and concerts.