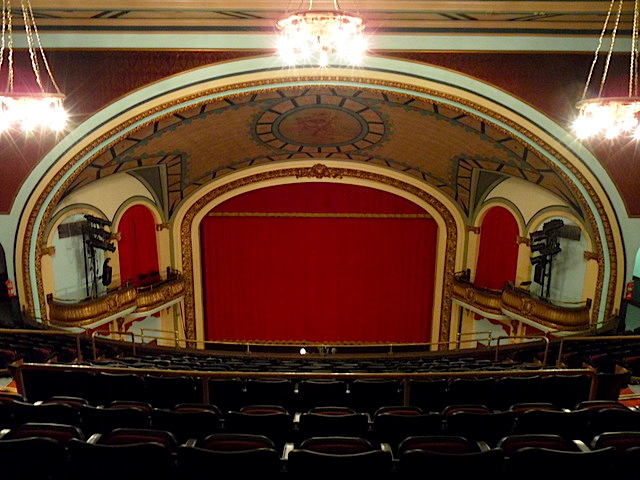 The Somerville Theatre, part of the Hobbs Building in the heart of Davis Square, was designed by the firm of Funk & Wilcox of Boston and built in 1914 by Joseph Hobbs. Designed for stage shows, vaudeville, opera, and that new fad – motion pictures – the theatre was only one of the Hobbs Building attractions, which also included a basement café; bowling alley and billiards hall; ten ground floor storefronts; and the Hobbs Crystal Ballroom on the second floor. The second and third floors also contained leased office space. The cost to build the Hobbs Building was $200,000.

The theatre opened its doors for the first time on May 11, 1914. The opening program featured a music and dance act – The Stewart Sisters; a comedy playlet by the Fuller-Rose company called “A King For A Day;” a singing skit by the Adairs; and “The Inventor’s Wife” – a two-reel film presentation.

In 2006 renovations restored the original auditorium interior to its original color scheme; and the stage was restored to its original size and upgraded with new curtains, rigging, and movie screen. In the summer of 2009, more renovations took place. The aging balcony was repaired and all new seating replaced the originals still there from 1914. Dolby Digital Sound and 24 surround speakers were installed throughout the original auditorium. And a revamped projection booth containing two Norelco DP-70 projectors was installed, enabling the Somerville to be one of the few movie theatres in New England that can run 70mm film.

The main theater seats 399 on the orchestra level and the balance of 500 seats in the balcony. The stage is approximately 41′ wide and 22′ deep, with a 32′ wide proscenium. The main theater can show archival film prints in both 35mm and 70mm formats on a pair of beautifully maintained Norelco DP-70 projectors, and features Dolby 7.1 EX Digital Sound, with two subwoofers and 24 surround speakers throughout the auditorium for cinema presentations.