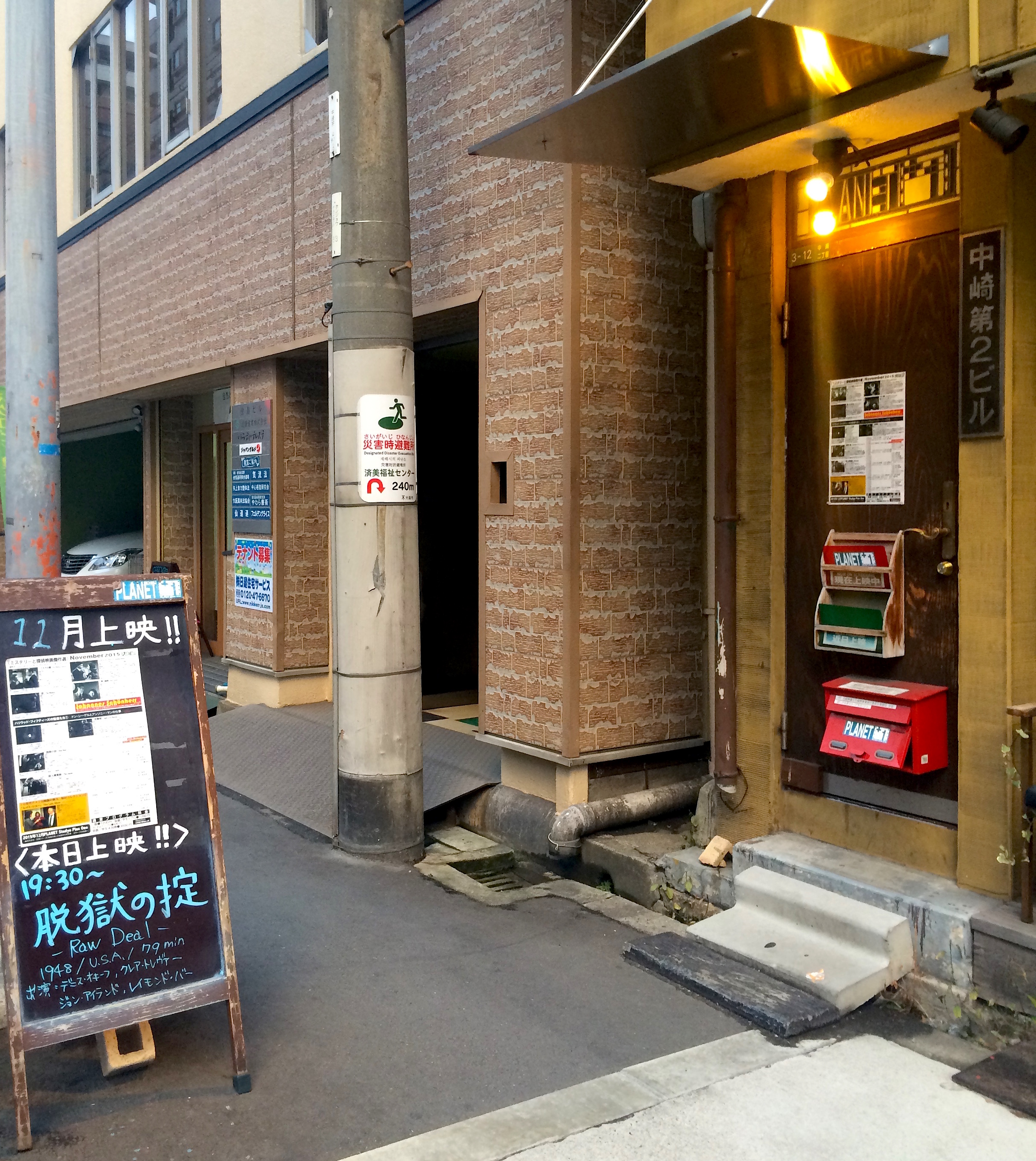 Planet Studyo +1 started operating on December 1st, 1995, on the hundredth anniversary of the Lumiere brothers’ first screening in Paris, which marked the birth of cinema.

In the 1970s and 1980s, film collector Yoshio Yasui had operated a film club named Planet Film Research / Planet Film Library in Osaka. Kunihiko Tomioka was a frequent visitor to the club’s screenings before he moved to Tokyo to pursue a career as screenplay writer.
In Tokyo, Tomioka wrote screenplays for various films, Kiyoshi Kurosawa’s The Guard from Underground (1992), is probably the best known film he penned.
Upon his return to Osaka, Tomioka got in contact with Yasui again whose Planet Studyo film club had since long ceased operating. Yasui told him about an available space in the basement of the same building in Osaka Doyama-cho in which Yasui had his office and in which he stored his film collection.
It was in this little basement space that Tomioka opened his first theater in 1995, named Planet Studyo +1 in honor of Yasui’s film club. The theater screened films on both 35mm and 16mm even though it had hardly space enough for 20 seats.

In 1997, Tomioka was approached by a young director whose graduation film for the Osaka University of Arts (Osaka Geidai) was too scandalous and no theater in the city wanted to show it. The director was Kazuyoshi Kumakiri and the film was Kichiku Dai Enkai (released as Kichiku in foreign markets). Kumakiri brought Tomioka in contact with a group of young directors working towards their degree at the Osaka University of Arts. Tomioka had a 16mm Steenbeck editing table at his home – and thus his apartment suddenly became the center of an emerging scene of young directors camping out at Tomioka’s house, working on the editing table and turning the apartment into a zone of endless parties. Several directors emerged from that scene who later achieved international acclaim, most notably Nobuhiro Yamashita (Hazy Life, 1999) and Go Shibata (Late Bloomer, 2005).

In 2005 Tomioka moved the Planet Studyo +1 theater to its current location in Osaka Nakazaki-cho. The new location offers a café on the ground floor (operated independently from the Planet theater), the theater itself is on the second floor and a gallery room used by the Planet theater for meetings, seminars and the like on the third floor. Unfortunately, rooftop screenings had to be abandoned due to noise complaints by neighbors.

Tomioka is still very actively working with the young and upcoming filmmakers of Osaka. He features their work in an ambitious annual festival called Co2 (Cineaste Organization Osaka), held in larger theaters in Osaka, and he is also deeply involved in producing, funding and creating new works by young directors.
Yoshio Yasui has by now moved his film collection to Kobe. Known under the name Planet Film Document Archives, the collection has grown into one of the biggest privately held film archives in Japan. Yasui and Tomioka jointly operate the Planet Film Document Archives, the Planet Studyo +1 theater often screens prints from the archives vast collection of both Japanese and international films.

Today’s program schedule at the Planet Studyo +1 theater consists to a large part of classic Japanese and Hollywood films from the archives (projected on 35mm or 16mm) as well as a wild assortment of the weird, the strange and the underground from both Japan and elsewhere. In terms of American films, on the screen of the Planet you are just as likely to encounter Humphrey Bogart, Robert Mitchum as, god forbid, Jamie Gillis. The Planet Studyo +1 is open for the whole of cinema history in its widest sense.

Planet Studyo Plus One