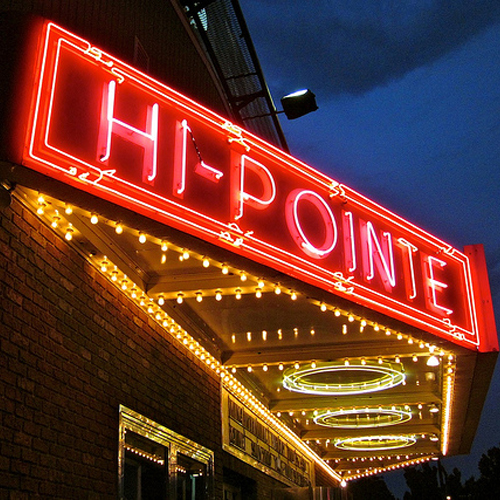 An understated and wonderful St. Louis gem, the Hi-Pointe Theatre was built in 1922 at the incredible intersection of Interstate 64, Clayton Road, Clayton Avenue, McCausland Avenue, Forest Avenue, Oakland Avenue and Skinker Boulevard, today also the home of the world’s largest Amoco sign and just at the southwest corner of Forest Park. Taking its name from the surrounding neighborhood, it is the highest point in the City of St. Louis. Unlike other theaters of its time, the Hi-Pointe was always intended to show movies—not vaudeville or plays—on the big screen in a huge, comfortable auditorium.

The theater has benefited from many renovations over its history. The aquamarine seating, long a favorite of St. Louis moviegoers, was added in 1963. Today, the theater boasts a huge new screen while preserving the theater’s historic and neighborhood cachet, including a cozy lobby, turquoise curtains, quaint second-floor restrooms and men’s urinals noted by the Riverfront Times as “the best in St. Louis.”

Moviegoers from all over the region love the Hi-Pointe, and it’s frequently voted St. Louis’s favorite theater.