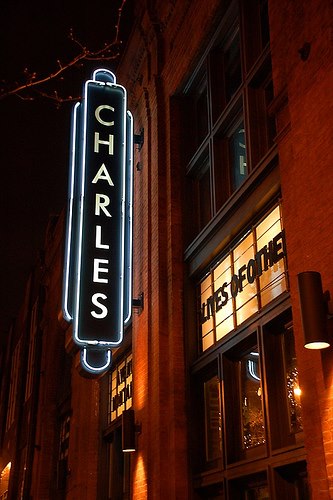 The only theatre of its kind in Baltimore, The Charles has the unique distinction of offering first-run specialty films in addition to Hollywood movies, foreign films and cinema classics. The 1150-seat, 23,000-square-foot movie house is located in one of Charles Street’s most intriguing historic buildings.

The 108-year-old structures which house The Charles boast a rich history. Designed in 1892 by architect Jackson C. Gott for the Baltimore Traction Company, the Beaux-Arts buildings were originally designed to be a cable car barn (north side) and a powerhouse (south side). The buildings served as cable car facilities for four years after which they became a streetcar barn, a bus barn, a library for the blind, and the Famous Ballroom. In 1939, the Times Theatre opened on the site as Baltimore’s first all-newsreel movie house. The theater was re-named the Charles circa 1959 and became a calendar revival house in 1979. The Charles remained a single-screen theater until 1999, when a dramatic expansion was completed to accommodate four additional screening rooms. The new five-screen Charles has a spacious, comfortable lobby and the four new screening rooms have stadium seating. The original auditorium still has 485 seats and has been altered only slightly.