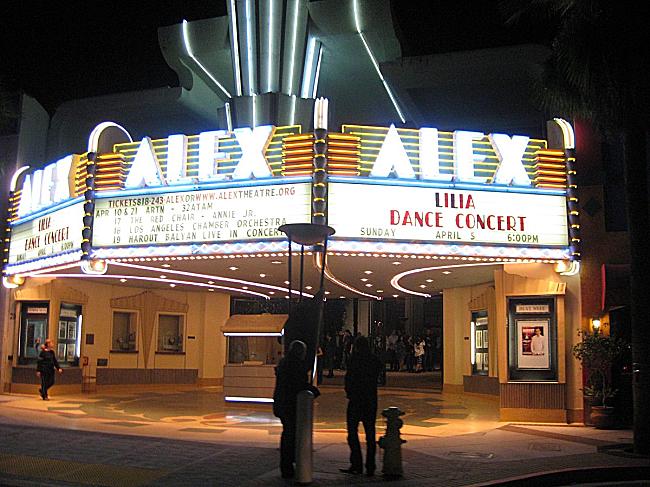 The Alexander Theatre opened as a Vaudeville house and movie palace on September 4, 1925. Through the 1920 to 1950s, the theatre served as a preview house for major Hollywood studio films, drawing the most glamorous stars of its day, including Elizabeth Taylor, Charlie Chaplin, Bing Crosby, and Barbara Stanwyck. In 1940 the iconic marquee and 100-foot tall Art Deco neon tower with chasing colored lights and sparkling sphere were added to the exterior. The Theatre’s name was officially shortened to “Alex.”

After screening first-run blockbuster films such as Ben Hur, Star Wars, Raiders of the Lost Ark, and The Hunt for Red October over the course of 60 years, the Alex ceased operations on September 26, 1991 with a screening of Terminator 2: Judgment Day.
The Glendale Redevelopment Agency purchased the Alex Theatre in 1992 to serve as the centerpiece of Glendale’s revitalized Brand Boulevard and embarked on a $6.5 million rehabilitation of the facility. On New Year’s Day 1993, the Alex Theatre opened as a 1,413-seat performing arts and entertainment center. The new facility included a stage expansion and new seating layouts, theatrical systems, and screen.

The Alex has hosted thousands of programs and activities since its reopening and welcomes an average of 100,000 patrons through its doors annually. It is home to resident companies such as the Alex Film Society, Glendale Youth Orchestra, Los Angeles Ballet, and Los Angeles Chamber Orchestra, and hosts a variety of music, dance, theatre, comedy, film, and special events each season.

In 1996 the Alex Theatre was added to the National Register of Historic Places. 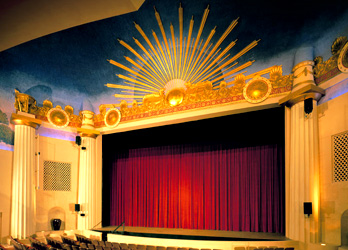